Elon Musk get your racist union-busting hands off social media 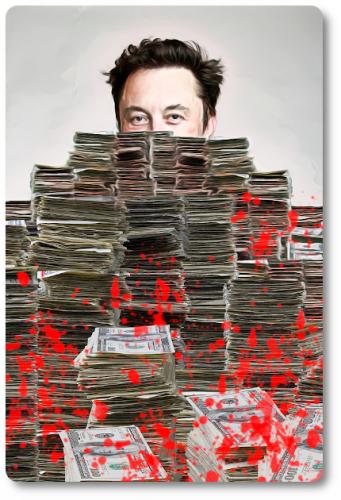 The racist massacre in Buffalo, New York, is the latest bloody attack on the Black community and this is only a continuation of open racist incitement and nazi ideology by Fox, Trump, and the Trumpsters. The Black, Brown, Asian and Jewish communities are under direct threat as these deadly racist attacks escalate.
Billionaire Elon Musk has now decided to spend $44 billion to take control of SF-based Twitter and use the platform to push this racist ideology.
Despite his prolific use of Twitter, he is strangely silent about the Buffalo massacre and the Nazi ideology of “replacement theory.” He also has a criminal record of racist terrorism at the Tesla plant in Fremont and union-busting to prevent workers from having a union to defend their rights on the job.
He also illegally conspired to cover up the injuries of workers at Tesla and prevented them from getting medical care. This is workers comp fraud but has been unprosecuted. His drive for profits mean slave labor plantation conditions at the Tesla factory.
He has been allowed to get away with these crimes because the politicians like Governor Gavin Newsom, who is a friend of Musk, refuse to enforce the labor, workers comp, and health and safety laws and every company he controls.
His Fremont factory was allowed to operate full blast during the covid pandemic even when there was an Alameda County Shelter In Place Order for all businesses in the County. Sick Tesla workers who were transported by buses to the Central Valley where they infected their families and working-class communities in the Valley as a result of Musk’s criminal acts. Newsom even caved in and said he could violate the law. It is clear that Elon Musk is ABOVE THE LAW.
We need to stand up against this racist and union-buster who wants to take control of this powerful global social media platform to propagate his anti-Black, anti-working class ideology. The danger of a racist, fascist USA is growing. We need a working-class political alternative that defends labor, and democratic rights, and workers should run these platform that they built.
On May 25, 2022, Twitter will have a stockholders’ meeting.
We Need To Speak Out And Make Our Voices Heard
No Racist Nazi Ideology On Social Media
No Slave Labor At Tesla or Twitter!
Enough Is Enough!

To endorse and participate
info@ufclp.org